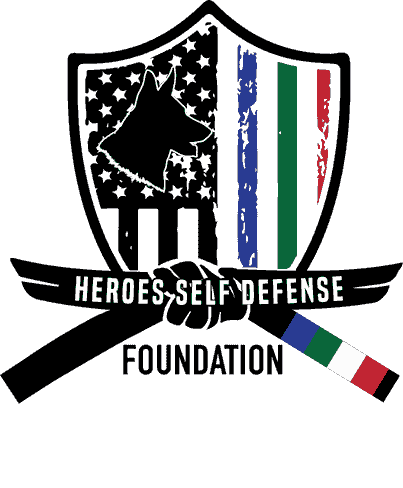 “Society has changed and as a result, there has been a dramatic increase in drug overdoses, violent crimes and assaults on First Responders in our communities. There is a gap in survival tactics training and a missing survival gear element in the First Responder Community and we are going to fill it.”

The foundation of the HSDF:

Our team is combined of Civilian, Military and Law Enforcement Veterans with a vast involvement in police and military training, K-9 handling and martial arts. Our experiences in these areas allowed us to see the gaps in training and much needed equipment. Our Military Veterans and First Responders took an oath to protect and serve our communities and families so we need to do what we can to ensure they make it home to theirs! All members of the HSDF Team have full time jobs and full time families but we believe in the old saying, "It takes a village" so we are paying it back and we would love for you to be a part of it!

What does the average defensive tactics training consist of in a police academy?

What is the average refresher training (annual updates) that a police officer receives on defensive tactics?

Police Defensive Tactics are non weapon techniques which typically include creating space, blocking strikes, controlling, de-escalation and striking (boxing). Defensive Tactics are what a Police Officer may use to protect themselves or someone else from an aggressive/combative subject or gain compliance from a resisting subject. These are options that an Officer would have to choose from when the use of a higher force is not necessary or justified.

Police academy defensive  tactics training, in general, is designed to give recruit officers the basic entry level training. Very basic knowledge.  While boxing and striking have their purposes and can be useful, they are not always the most efficient or effective against someone  under the influence of alcohol or drugs or suffering from an extreme mental disorder which occurs more often than you would think. On top of that, the Officer can cause more injury to the suspect than intended and can injure their self as a result of punching the suspect’s face, the ground or hard object on a miss. MMA and Boxing has grown over the years and more and more people are practicing on there own or in clubs. If the Officer begins punching a suspect who has more boxing experience than they do, things can go bad real fast. Punching may also “appear” to be violent and in today’s world, all eyes and cameras are on the police, not the person causing the issue. So boxing/striking can be very effective but it's not something an officer should rely on.

Ground fighting may consist of a handful of techniques including how to control someone on the ground, how to get back to their feet, and a weapon retention technique. For the most part it’s a good start, however it is perishable training that needs to be continued and built on. After graduating from the police academy, the average police agency across the nation only requires Officers to attend defensive tactics update training four hours every two years.  Some agencies require more and some require less. As we stated above, more and more people are learning MMA and the absolute worse time for an Officer to find out their training is not sufficient is when they have already been pushed in the pool. We need to give them more swimming lessons. Considering every personal encounter for an officer is a potential assault and MMA growing as a sport, what can we realistically expect from an Officer with limited training faced with a violent person.

Here is where the HSDF comes in. After graduating from the police academy, Officers have a few options. They can do nothing,  attend defensive tactics elective training at their academy, or attend a local martial arts training center. Doing nothing should not be an option. Academy elective training is a great opportunity but it's not offered enough and not all agencies have access to this kind of training. Not all martial arts training centers harvest the most police friendly which can result in unnecessary injuries and fear to train. For these reason we sponsor training and provide workshops throughout the year for Officers to attend. First Responders can also contact us to find a local jiu jitsu training center.

Military Police Officers receive combatives training but this seems to be standard for all soldiers which means Military Cops are dealing with other soldiers who know the same tactics and counters as they do. That’s like playing checkers with someone that knows all your moves.  We offer actively serving Military Police Officers (from any branch) the same opportunity.

EMS Professionals receive an abundance of life saving medical training but they don't receive training to save their own life in Self Defense.  With drug overdoses and patients suffering from extreme mental disorders, assaults on EMS Professionals are on the rise. From the scene of a motor vehicle crash, to medical call at a residence, the back of an ambulance or at the hospital, EMS Professionals are right in the mix and left defenseless.

Unfortunately, a lot of police canines units are considered non-essential by their agency and are not always supplied with the equipment they need or the funding with approximately 90% off all LEO K-9 units rely on donations to function. Canines are called upon to apprehend the most violent criminals in the most dangerous situations, but they are not always afforded the same protection as human Officers. If an agency does not purchase a ballistic vest for the canine, it will go without protection until the handler purchases one or funds can be donated. We recognize this deficiency and work with Law Enforcement agencies to determine the need for canine ballistic/knife protection vests. We work with a reputable company that provides custom made vests at a discount of $1,800 each so we rely heavily on sponsors to help with these purchases.

Much like human Police Officers, Canines are also sometimes injured in the line of duty while apprehending suspects and in vehicle crashes. In January 2019, an HSDF team member's patrol vehicle was struck by a drunk driver causing traumatic injuries to the K-9. The outpour of support and care packages received from all over the country provided an amazing mental and physical calm not only to the canine but the handler as well. Since then, we have made the decision pay that forward and  and partner with Tanners Endless Love and Concord Pet to send care packages to injured police canines throughout the country. How cool is that! Check out our Furry Heroes page for canines we’ve helped with your support.

From all of us here at the Heroes Self Defense Foundation,

Thank you for listening to our story and we appreciate your support!

The Heroes Self Defense Foundation Team